A chilling picture is emerging about the practices of Malaysian logging giant Rimbunan Hijau towards its local workforce and its disregard for PNG’s labor laws.

After months of careful research, Masalai is able to reveal for you the appalling conditions suffered by local workers in Rimbunan Hijau logging camps. These include unsanitary and inhumane living and working conditions, racial discrimination, abuse of labor laws and the blatant disregard of immigration rules.

In bringing you this new and exclusive report, Masalai is able to present documentation from within RH company headquarters, from the Departments of Labor and Foreign Affairs, from landowners and company employees and information received from organisations in Malaysia and the Philippines.

Rimbunan Hijau is the largest logging company operating in Papua New Guinea. It dominates the forestry sector and has control of more than fifty percent of all log exports.

Last year (2003) Rimbunan Hijau exported from PNG over 240 ship loads of raw logs worth more than K113 million and an unknown quantity of sawn timber and veneer.

The appalling environmental damage caused by RH in its logging operations has been documented in numerous reports and there has been widespread condemnation of its human rights abuses including the use of police mobile squads to repress local people.

But now the focus is turning on to Rimbunan Hijau’s abuse of local workers, appalling employment conditions and the routine and illegal use of foreign workers.

In 2002 Masalai was able to reveal that Rimbunan Hijau employs hundreds of foreign workers from the Philippines, Malaysia, China and Indonesia in unskilled and semi-skilled positions that could be easily filled by local Papua New Guinean workers.

The employment of foreign workers in such skilled and semi-skilled positions is in breach of PNG labor laws and migration requirements.

The Department of Labor has recently made a rare visit into a logging project area. Their unpublished report reveals the consistent abuse of training plans and work permit guidelines with no systematic training or skills transfer and unsafe working practices.

The Department found that many foreign workers who had permits for senior positions such as managers and supervisors were in fact employed in semi and unskilled positions that could be filled by local workers.

While the company claimed that it employed 38 foreign workers ‘visual observation’ indicated that the numbers were far higher.

"There is no evidence of trade skills and apprenticeship training being conducted on logging sites" and "safe work practice is non-existent" the Department official noted.

The lack of any commitment from Rimbunan Hijau to employing and training local workers is confirmed by startling information from the Philippines.

Rimbunan Hijau and its subsidiary logging companies actually use a Philippines based recruitment agency to find Filipino workers for its logging projects in PNG!

Rimbunan Hijau companies regularly use the services of the Ledmir Human Resource Exchange Corporation to find and recruit workers in the Philippines who are then sent to work in semi skilled and unskilled positions in PNG.

Ledmir claims that it has sent over 1,700 Filipino’s overseas since 1993 and it currently sends an average of 30 workers overseas each month. 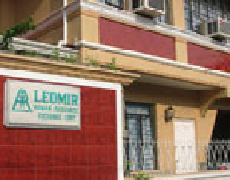 The Ledmir office building on Negros Street, Palan in Makata City. You can give them a call and ask them about their relationship with Rimbunan Hijau on (632) 551 8029. Or why not send them an email at   admin@ledmir.com

At the same time that Rimbunan Hijau is recruiting Filipino workers through Ledmir, it has been revealed that the Philippine Authorities are cracking down on an alleged people smuggling racket involving PNG.

According to local newspapers, immigration staff in the Philippines are now subjecting all PNG bound tourists to secondary checks as an increasing number of people are traveling into PNG under tourist visas and taking up jobs here.

The utter disrespect and contempt from Rimbunan Hijau for PNG, its people and its skilled workers is only emphasized by the appalling conditions and abuses suffered by the PNG people who are employed by the company.

Wages and other financial benefits

Low wages are also made worse by company tuck shops and canteens that are the only source of store goods and that charge exorbitant prices. At the end of a fortnight a worker can be left with less than K10 in his pay packet according to government reviewers.

The logging companies are also failing to make any NASFund contributions on behalf of their staff and most workers are uninsured.

With low pay and no leave fares, workers recruited from other Provinces often can’t get home to see their families and single men who marry locally find it almost impossible to take their families back home.

Housing and general living conditions at most project sites are very bad for local workers. While their bosses and ex-patriot colleagues have their own camps with proper housing, running water and flush toilets, local workers suffer in low quality, unhealthy and hygienic housing.

There is usually no organised waste disposal including a lack of adequate toilet facilities. There is often no safe drinking water and no proper cooking facilities and the conditions are generally unsanitary.

At one RH logging camp there was found to be one shower and one laundry tap for more than 200 people!

Log camps often have no environmental approval and there is never any inspection of the conditions by government agencies.

Rimbunan Hijau does not provide free access to health and safety equipment for local workers. No ear muffs, no gloves, no safety boots, no access to clean water, no first aid kits. Vehicles are generally unregistered and uninsured.

While there are allegations that some ex-patriot workers are also illegally trading in beche de mer, vanilla and other forest products, local workers are not so fortunate – it is reported that some of those who die are not even repatriated to their home Province but are unlawfully buried in the bush to save on expenses!

Anyone who dare complain is summarily dismissed, or ‘dealt with’ by local police thugs employed by the companies.

While companies like Rimbunan Hijau are allowed and indeed encouraged to operate largely outside the law the attempts of the government and the legitimate business community to attract new investment into the country will be largely futile.