Documents obtained by Masalai i tokaut appear to show that the Minister for Forests, Mr Patrick Pruaitch, has misused public funds, abused his position as a Minister and lied to Parliament.

As was widely reported in the media back in January of this year, Mr Pruaitch has admitted that he is a member of the South Pacific Motor Sports Club in Port Moresby, but he has repeatedly denied that the PNG Forest Authority paid his membership fees.

Financial records from the PNG Forest Authority and a hand written letter from the Secretary for the Department of Environment appear to tell a very different story.

In a Parliamentary Democracy the abuse of position by a Government Minister, the misuse of public funds and lying to the public are very serious matters. Normal protocol would demand that a Minister stand aside until there has been a full inquiry and if found guilty, he would be honor bound to resign.

We doubt that this Minister or his political cronies will show any inclination to uphold these traditions of a democratic system of government or show any moral bravery in the face of the facts that Masalai i tokaut has uncovered.

The National Alliance and the Prime Minister campaigned on truth in Government before the last election and made many promises about the eradication of corruption; unfortunately those commitments have proved time and again to be meaningless words.

On the 4th of March 2003, the Minister for Forests, Mr Patrick Pruaitch, and the then Secretary for the Department of National Planning, Mr Valentine Kambori were introduced as new members at the South Pacific Motor Sports club by Dr Wari Iamo.

Dr Iamo is the Secretary for the Department of the Environment and a long standing club member. Valentine Kambori was at that time, the new Chair of the National Forest Board.

In a generous display of friendship, Dr Iamo personally paid the K680 membership fees of both Mr Pruaitch and Mr Kambori. The K680 was made up of K200 per man as a ‘nomination fee’ and K140 each for their ‘membership’.

The money was paid at the door of the club and was accepted by the club’s Secretary, Mr John Hasting. 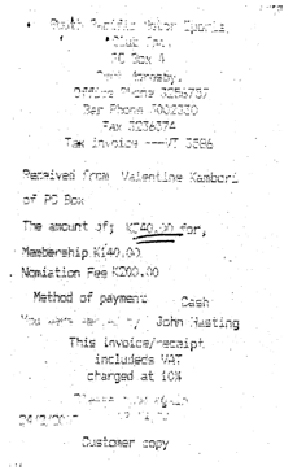 
The South Pacific Motor Sports Club on Waigaini Drive in Port Moresby is the favorite haunt of logging industry executives, staff of the Forest Industries Association and various politicians and their cronies.

According to former Minister for the Environment, Sasa Zibe, the club "is used as a cover to do illegal logging deals with politicians and public servants".

Having introduced the Minister and the Secretary for Planning to the club, a few days later the Secretary for Environment made a personal application to have the Forestry Authority reimburse the monies that he had paid for the membership fees.

In a letter dated 10 March 2004, addressed to the Finance Controller at the Forest Authority, but marked for the attention of the Second Secretary in the Minister’s Office, Dr Iamo kindly explains for us how,

The letter ends with Dr Iamo’s request that

"through the Ministers Office that this monies (sic) be reimbursed to me". 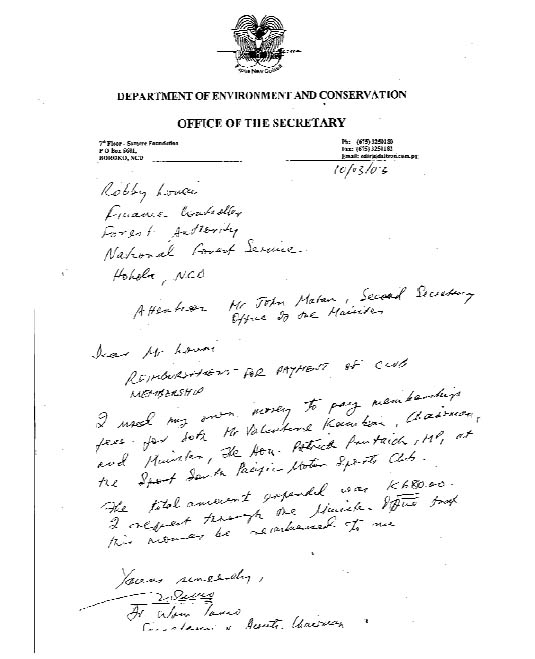 It appears that the Office of the Minister looked kindly upon Dr Iamo’s request and that his refund application was quickly processed by the PNG Forest Authority Head Office.

Masalai has obtained a copy of a Cheque Requisition form that appears to show that a cash cheque in the sum of K680 was issued to the Forest Minister on the 10th of March 2003.

The cheque was stated to be "in payment of refund of club membership". 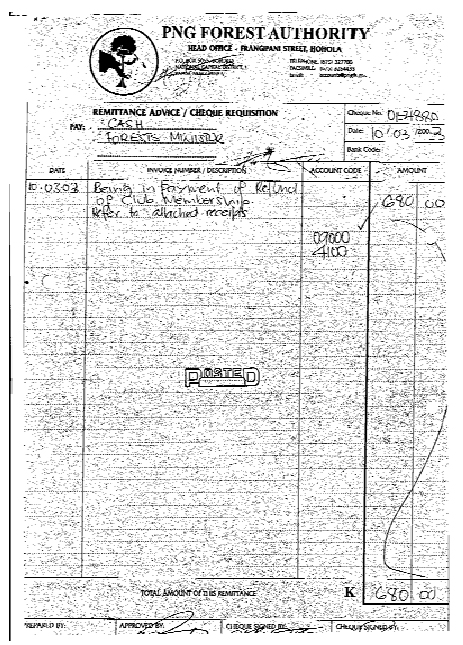 The Cheque Requisition from the files of the PNG Forest Authority

Patrick Pruaitch was questioned about these matters in Parliament on Tuesday the 20th of January this year. He repeatedly denied that the PNG Forest Authority paid his membership fee and claimed that he had paid the fees from his own pocket.

The Minister was asked quite bluntly by the Hon Sasa Zibe, MP,

The Minister went on to say that he would give a ‘written explanation’ and a ‘detailed answer’ as to how it appeared that the Secretary for Environment in fact paid the fee on his behalf.

It is now some seven months later, but that written explanation from the Minister has never been forthcoming.

We also have a Secretary at Environment and Conservation who has abused his position to unlawfully obtain monies from the PNG Forest Authority and misused public funds.